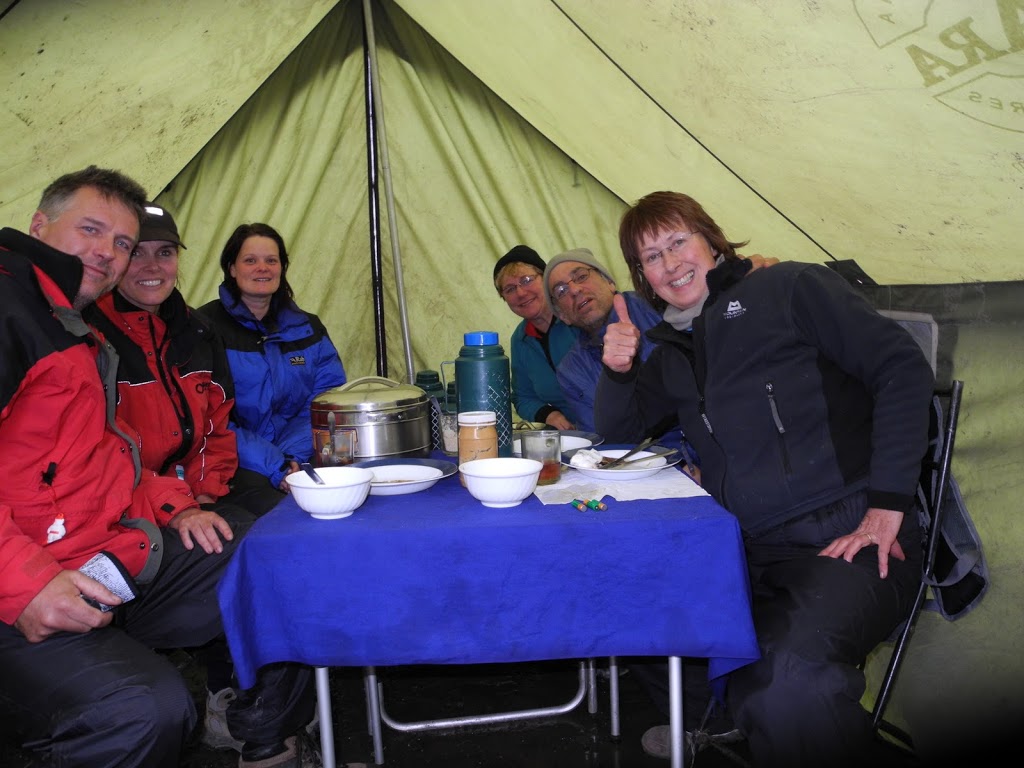 I am writing about the climb with a few days perspective for a number of reasons. First, as you will learn, the ascent was a very serious affair. Second, the decent followed immediately and I became quite tired and exhausted. Finally, the following day started our safari. So it has been difficult to find time to even begin to write this. Also, even with perspective I am not sure how start. So let me start with the end. I made it! Yes, in spite of a blizzard and near complete white-out with gale force winds, I made it to Uhuru peak. I cannot tell you whether there was sunrise since there was no sun visible. Just endless snow and strong winds trying to prevent me from achieving this goal. This was a freak and unseasonal blizzard that caught everyone, including Florence, by surprise.

Everything started normal enough. At 5pm we had dinner. I played for the group songs with the word mountain in it (ain’t no maintain high enough….) on my iPad. We took a group picture before we went to sleep. 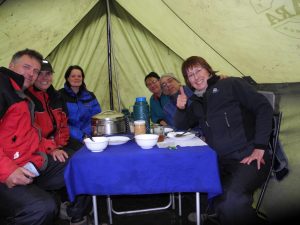 We were in good spirits. We all retired to catch some shut eye but I could hear some snow or rain on the tent. I got up around 10:30PM and started to dress. I decided to add an additional layer to my upper body to be 5 layers. I also put a chemical heating pouch over the center of my chest. Somehow, I felt this kept my whole body warm. I had three layers for my legs and warm Marino wool socks and Ori’s amazing gloves. I also packed different face and head covers based upon how cold it would be on the mountain. Though I was told to expect maybe a little snow, what happened over the next 6 hours was completely unexpected.

At midnight we started to move. I wasn’t even going to bring my gators and only changed my mind and put them on in light snowfall at the last minute. We set off in this light snowfall that proceeded to get heavier and stronger. The winds picked up blowing he snow into our face. About 2 hours into the climb I started to see people coming down, clearly before reaching he summit. At around 3AM I felt weak and asked for a hammer bar and sure enough in a few minutes I felt stronger.(There is so much we could discuss concerning proper nutrition.  I was shocked how little people understood the impact of this during extended exertion.) During the climb, I was so concerned about the cold and taking off my gloves, I did not remove my cameras that I had strapped to my chest under two of the layers so they would not freeze.

The snowfall started to quicken, temperature dropped rapidly and the wind picked up. I noticed that at least 3 inches fell in a few hours and the drifts were starting to increase. As we got to the first part of the summit (Stella point), the winds seemed to be over 50 mph with white out snow fall and temperatures at least minus 20 Celsius. Here is a video from my Drift perspective camera of what the Stella point was like.  (You can see Deb in the background sitting and trying to compose herself from the weather. As I looked out towards the peak, I saw nothing but the faint images of a few people due to the white-out. People were clinging to Stella rock covering their eyes and in pain or catching their breath. It was surreal. I tried to find out whether Deb and Vic were okay but they could not hear me. I turned to Florence and said I either go now or I won’t do it. He determined I was still okay and we started.We started across a ridge line in the direction of the peak.  Here is a video of what that looked like.   My guess by this time the temperature was somewhere between -10C and -30C depending on gusts of wind.

I literally saw snow drifts chest height. I could not see far due to the storm. My right eyelid was frozen in position due to the wind. My face was frozen. But I just pushed on. Florence wanted to know if I was okay because I was stepping oddly. Was this signs of altitude sickness? I told him I was fine. But was not sure. I read somewhere that counting helped determine if I was becoming altitude sick or not. So I counted to 10 and back. Then I counted to 10 and back in Hebrew. Then I started to recited my grand-kids names in age order and I could not remember Elchanan’s name. I became scared. Florence asked if was okay. I then remembered Elchanan’s name and said yes. A sense that this was life threatening came over me — thought I must be honest that I did not have a premonition that I would die. I saw people returning from the peak. They faces were blank. They did not look happy but stunned and in shock. Suddenly in the distance I could make the faint outline of the elevation marker.

In the meantime, I saw Vic and Deb racing past me. I could not believe they were going so fast but I would not allow that to upset my concentration. I was going to go pole-pole and NOT change my pace. Nothing would be worse than altitude sickness in this weather. When I got to the marker I hugged Deb and could hear her cry. I told Florence to take my picture quickly 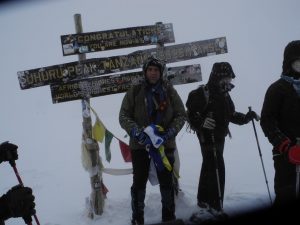 because I could not remain long in these conditions at the peak. I took out Ori’s shirt he gave me for Aylin Hospital bike ride and the shirt for our bike club, For Galilee Cycles. I then unfurled the Israeli flag and I was done.  Here are the other shots: 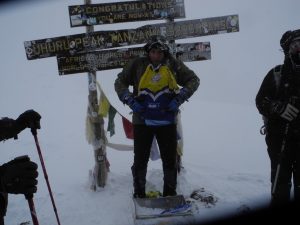 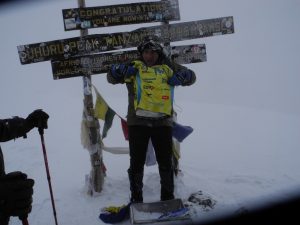 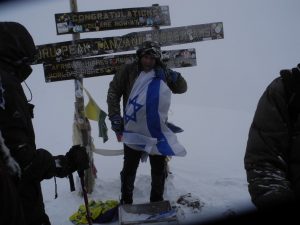 To give you a comparison, an acquaintance sent me his photo at the peak from last November. I think you can tell the difference. 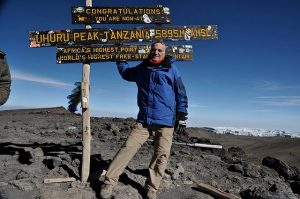 The return was a trip in itself. The blowing snow continuously hid the path. I kept falling in the snow as we went downhill. My energy was spent. I could have gone to sleep in the freezing cold never to awaken. 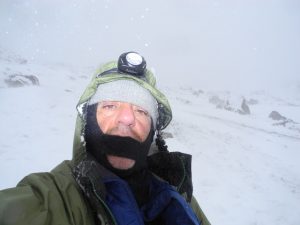 I then decided the only way to get down was to slide on my ass. Here is the picture I asked Florence to take for a tea-shirt I plan to make with “Ski Kilimanjaro” as the caption. 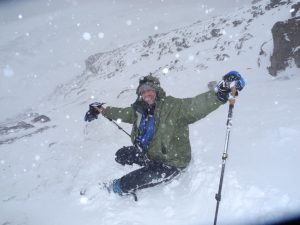 Crazy me, I shot video of me skiing on my ass down the hill.     I did, with lots of difficult make it to base camp and lunch. It turns out of the 6 of us, only Vic, Deb and myself made it to the peak. The other three did, amazingly, make it to Stella point. I have since discovered that at least 4 people, for what I hear they were porters, died during these storms. I do not know the details.  I would assume that Tanzanian Authorities do not want this to be well known (in fact, it is understood that about 10 climbers and 10 porters die every year climbing the peak. also, it is understood that much less than 50% make the peak.)

and telling Florence I was too weak to move. But in the end, I made it back to base camp. The next phase was a 3 hour decent to our evening layover at Mweka Camp to finally getting out of the park the next day.

To say this was the MOST painful part of the trip is putting it mildly. I sit here almost 5 days later and I am still in pain. I assume a few of my toe nails will fall out (gross–this has never happened before). Each step onward became progressively more painful to my toes and knees. 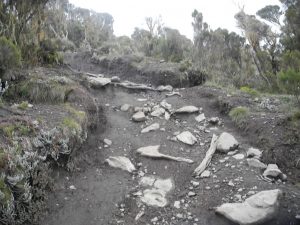 Because I started late, the last hour or so I needed to use my headlamp in the kilimanjaro jungle. I fell numerous times. Wet, slippery and intensely angled downward I thought I was gong to die from pain. I made it limping into camp to find my compatriots equally in pain and crippled.

After convalescing the night at Mweka camp, the next day was more of the same. Each step brought upon additional injury. At some point I started climbing downward on reverse and Florence thought I was nuts but it did help a little. As I approached our final gate, there was Ori, camera in hand, taking pictures. I was back. And very glad to see him.

I paid the tips and said goodbye to our new friends. I am sure we would say in touch. I limped painfully to the car for the next part of our trip, the safari journey.

– Posted using BlogPress from my iPad